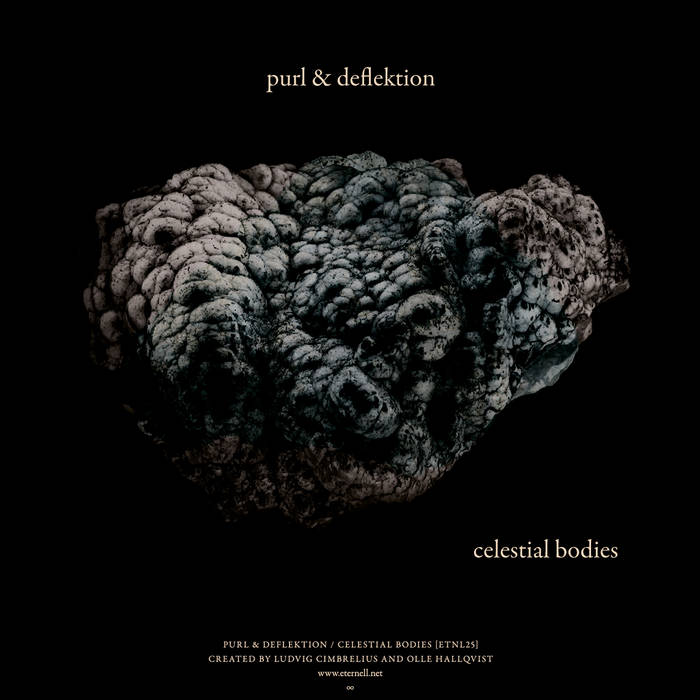 Spielman Zaisho is incredible. Thanks for this! Favorite track: Zaisho.

Warmth | Archives This is simply one of the greatest things I've heard in a long time. I can get lost in these long pieces over and over again.

The third installment to emerge from the creative mindmeld of Ludvig Cimbrelius (Purl) and Olle Hallqvist (Deflektion), 'Celestial Bodies' actually began to form long before Ludvig and Olle started the musical journeys that would become their first two albums 'Growing' and 'Rest In You', both released by Dewtone Recordings in 2012 and 2013 respectively.

So how did 'Celestial Bodies' came to be? Many years ago, Ludvig created a loop with a radiant sound that he named "infiniteloop" and sent to Olle, who returned with a 27 minute epic drone crafted from this loop. It was vibrantly alive, howling with deep distortion, expressing the intensity of emotion that arises from complete absorption in the beauty of a moment–like losing oneself in the glimmer of sunlight on a rippling current of water.

Early 2017, more than 10 years later, Ludvig again revisited this momentous drone. He wanted to soften the sound while retaining its emotional intensity, and went about creating multiple layers in various pitches and ranges of frequency, carving out thin layers of the drone, treating them individually and blending them together again. This exploration continued slowly as winter turned to spring. The completed piece stands as a loving tribute to the sun–to the seemingly calm, yet turbulent and explosive nature of the sun's surface, to the unimaginable power and energy that lies hidden in its core, and to the human experience of bliss that is evoked by immersing oneself in rays of sunlight.

Two more tracks grew out of the creative flow during the spring, with Olle generating wild live recordings on analogue gear and Ludvig doing his best to tame the beasts, distilling their raw beauty and melting them together with his own aural universe. 'Moon' is reflective of a shared experience at the Love Forest festival many years ago deep in the Swedish forest, where the artists found themselves sitting at a lake shore at night with the moon up above, listening to the humming drone of the progressive trance dancefloor far away; the synthlines reverberating on the trees across the lake and blending with the deep rumble of the throbbing bass into a deep and blissful ambience, far removed from the intensity of the actual sounds as they would have been perceived on the dancefloor. 'Zaisho' is the name of a meteorite that fell down in Japan in 1898, belonging to a rare class of meteorites known as pallasites. It felt appropriate to name the final track in tribute of this unique celestial body that decided to touch down on Earth after billions of years travelling the vastness of space alone.

Spring turned into summer and when Ludvig visited Olle in July 2017, they finalized 'Celestial Bodies' together. They also manufactured 40 hand made CD-r copies, all sleeves glued together by the hands of the artists, each one unique in its rough edges and surface marks. Most covers were printed in black-and-white, a few ones are in color.

20 of these copies are sold here from eternell.net, 5 were sold from Databloem in the Netherlands (databloem.com) and 5 from LINUS Records in Japan (www.linusrecords.jp). The remaining 10 copies are unaccounted for.