← back to
Stereoscenic Records
Get fresh music recommendations delivered to your inbox every Friday.
We've updated our Terms of Use. You can review the changes here.

Beneath an Endless Sky 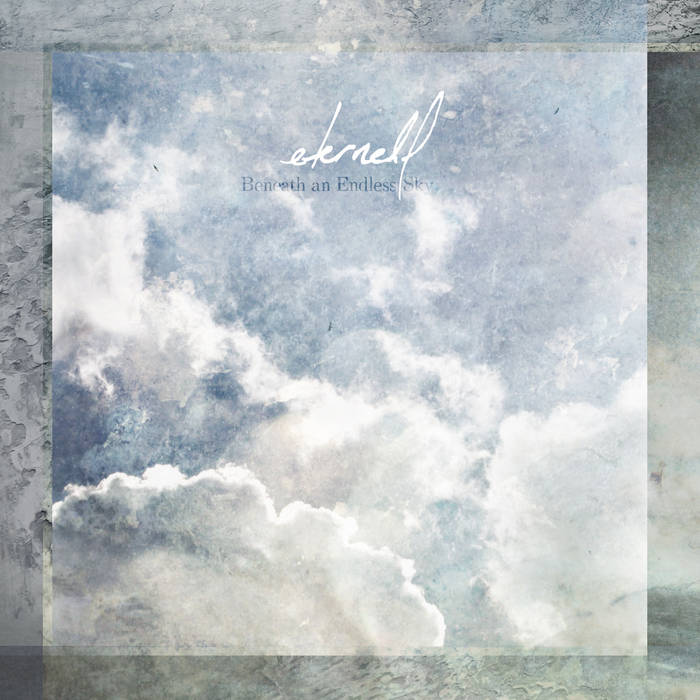 Paul Asbury Seaman Eternell's music reminds me of Cousin Silas; in other places it has the slow, undulating synth washes reminiscent of Steve Roach's signature sound, but all within the parameters of the "Sleeping Pill" aesthetic. Clocking in at almost 2 1/2 hours, this is a generous collection with some nice variations in its emotional atmospheres. Of special note: "Gray Havens" and "Inner Wandering." Favorite track: Tiara.

rikm "Beneath an Endless Sky" takes me back to that familiar Shoegaze space of the early- to mid-nineties, a Slowdive-y kind of Araki feel, a languid drift that speaks in equal parts to inner bliss and open skies. That's a feeling I treasure, and when it comes onto me like it does here, I can't help but lose myself in it's charms...

zenmind Such a beautiful collection. I'm filled with gratitude and travel deep into the heart space that connects us all.

All selections have been specially edited for this compilation.

"It’s interesting to think back on how this compilation has come to be. I remember Marek Kamiński of Lights Dim recommended that I check out “A Quiet Awakening” by Purl, and I was immediately hooked—the depth and beauty of this music was impressive! For a while I was collecting any album Ludvig released under his various monikers from his bandcamp page called Eternell—which I understood to be a sort of label name. Then one day he released “Waking Music”. It seemed like an absolute masterpiece, the same vibe as “Drown in Love”—my favorite track from “A Quiet Awakening.” I wasn’t sure how to present the music on my radio show, however, because this album did not actually specify an artist name. I got in touch with Ludvig to clarify, and to tell him it was an amazing album with “Inner Wandering” perhaps being the best ambient song I’ve ever heard. It turns out, he didn’t think this album quite fit his Purl project, and was considering using Eternell for this release. We discussed releasing it as a proper 2-CD set on Stereoscenic as the first official release under his new ambient moniker. At that time life got really busy for me and I can only fast forward to last summer when Ludvig got in touch with me about the idea of doing a compilation for Stereoscenic. It was already time for a retrospective album, with ten Eternell releases to date!

Since then we’ve spent a great deal of time selecting tracks, putting them in order, and polishing them. Many of these tracks are shorter than the original versions, but we’ve preserved the essence and flow. Some tracks have evolved into significantly different mixes since we started, others have just been lightly remastered. I’m especially proud to have made custom edits of 3 tracks from the original edition of “Waking Music” (no longer available elsewhere) which recapture the magic of the original versions I first heard—it feels fantastic to finally be releasing them on Stereoscenic! This whole endeavor has been a great privilege to me and the music presented here is truly a gift to the world."


Track information and some notes from Ludvig on how the music came to be:

“This album was born out of a tumultuous time in my life. I didn't have a place to call home in the world and had devoted myself to a spiritual search, part of which seemed to be about experiencing a state of inner security that was not dependent on external structures. Three albums were formed during this time: “Stillpoint” (from Purl), “Life Will Set You Free” and “Self”. I traveled with a sturdy old laptop and a Zoom H1 portable recorder to capture sounds with; my old cherished kalimba, the surrounding environments and my own voice. When I came across other instruments along my path I often made recordings playing them—letting them become part of the sound collages that were forming. It was an intensely creative time. The majority of the material that makes up the “Portals” album also took shape during this time, but the actual editing and mixing of that happened later in Sweden (the country where I was born).”

“One of the more aesthetically diverse Eternell albums, “Children of Infinity” is outlined by recordings of a deeply meaningful nature for me personally. Some were made by me and lifetime friend Rasmus Alkestrand, whom I had the privilege to get to know while we were traveling India together (back in 2009). Even though none of our collaborative tracks are included here, I have to mention our relationship as a source of inspiration for compiling this album—the third one from Eternell to get a release on CD. It also carries a song that I created from an improvised recording of me and my sister singing together.”

“This music was born while I stayed in a bamboo hut in southern India, with open walls and a leaking ceiling (during monsoon season). Sequenced on a 10”-screen laptop that barely had enough strength to run the audio software I was using, everything had to be created in layers that I exported and then continued building on in a new project, repeating that process until the songs felt complete. I made field recordings in the surrounding areas, adding sounds of the environment to the music. Electricity would often cut out due to heavy rainstorms, and when that happened I had about 10 minutes of battery life in the laptop to work with. I don't remember feeling hindered or bothered by any of the limitations—instead I remember being completely absorbed in the emotion of these works while they were taking shape. This was back in 2009, however the music was not released until 2013. A year after that I re-edited and remastered the album for a 2-CD release that was intended for Stereoscenic, but which I ended up releasing by myself since it was not possible for Andrew to devote the time necessary for the project (some copies of the physical release are still available from eternell.net at the time of writing these words.)”

“The origins of “Floating” are older than those of “Waking Music”—endless droning guitars recorded some time in the distant past, then forgotten and rediscovered much later to form the foundation of the original 70 minute piece (which has been edited down significantly for this release). This soundscape also features parts of an astounding vocal recording made by my dear friend and frequent musical collaborator Genoveva Kachurkova.

My final words here are of gratitude directed to Andrew Klimek, for his support and attention to detail in the process of compiling this album—it speaks to how deeply he cares about the music, wanting to give it the best possible presentation. I feel honored to have been able to work with Andrew, and I also thank Angie Klimek for her encouragement and for contributing to the artwork of this album.

The deepest wish I have in sharing my music is that it may help you find resonance with the loving essence of who you are.”


[“eternell” is a word that carries the meaning “evighetsblomma” in Swedish; translating to English as “eternity flower”]

All tracks written and produced by Ludvig Cimbrelius

Additional post-production and mastering on tracks 5, 8, 10 & 11 by Andrew J Klimek